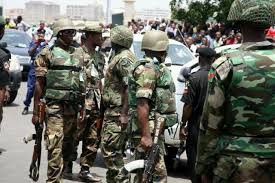 The Nigerian Army has said it will not disclose the identities of its men who were deployed to the Lekki tollgate on October 20, 2020.

In an interview with Punch, Osoba Olaniyi, spokesman of the 81 division of the Nigerian Army, said it is unprofessional for the Army to release the names of the soldiers who were deployed to the tollgate on that day.

Olaniyi in the interview, also stated that the Army will only appear before the judicial panel set up by the Lagos state government to investigate allegations of police brutality in the state as well as the October 20 Lekki tollgate gunfire incident, if the invitation is coming from the state government and not the panel.

Recall that the judicial panel on…