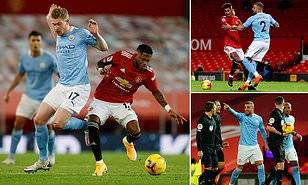 The game, devoid of excitement, was a missed chance for both teams looking for vital points to climb the Premier League table and catch league leaders Tottenham, Liverpool and Chelsea.

In the first half, Gabriel Jesus was off target while Riyad Mahrez brought a routine save from David de Gea while Scott McTominay almost scored from Victor Lindelof’s flick as United sought the breakthrough.

Despite the tactical awareness of both teams, the math ended in a draw leaving United seventh in the Premier League and City a place below them.

‘I’m addicted to orgasms, I have them just from looking at someone”