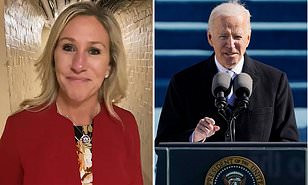 Barely 24 hours after Joe Biden’s inauguration as US President, a Republican lawmaker, GOP Rep. Marjorie Taylor Greene has filed articles of impeachment against Joe Biden, alleging abuse of power by Biden from his time as vice president.

The newly sworn in Rep. from Georgia, who has supported QANON conspiracy theories and criticized the 25,000 National Guard deployed to Washington D.C. to protect the presidential inauguration, took to Twitter to make her announcement.

“I’ve just filed articles of impeachment on President Joe Biden, we will see how this goes,” Greene said.

She then immediately used her announcement to raise money for an “Impeach Joe Biden Fund.”

In a press release, she accused Biden of “enabling bribery” and “blatant nepotism” by utilizing his son Hunter Biden’s position on the Ukrainian energy company, Burisma.

“President Joe Biden is unfit to hold the office of the Presidency. His pattern of abuse of power as President Obama’s Vice President is…