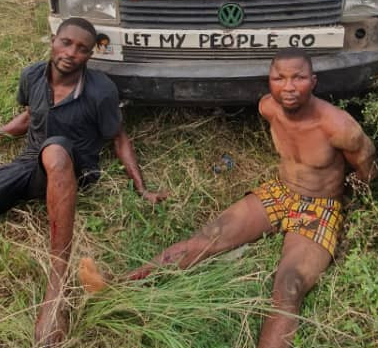 The two suspects, Solomon Aghofure a 30 years old indigene of Delta state, and Emmanuel Mathew a 37 years old indigene of Abia State were arrested when the police patrol team of Shagamu division were on routine patrol of the expressway at about 1:30 am. The suspects and their gang who have already positioned themselves at the interchange in readiness for attack on the commuter plying the road opened fire on the passing patrol team led by the DPO, CSP Okiki Agunbiade.

A statement released by the spokesperson of the state police command, Abimbola Oyeyemi, reads in part

”The team engaged them in shoot out at the end of which one of them sustained gun shot injuries and subsequently apprehended.

Other members of the gang escaped into the bush abandoning their operational vehicle. The bush…