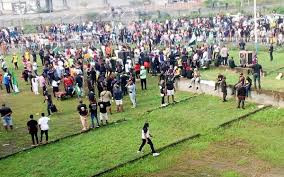 Three persons have been confirmed dead following an incident at a betting shop at Aba branch satellite market in Ehime Mbano LGA in Imo state on Friday, April 2.

According to a statement released by the spokesperson of the state police, SP Orlando Ikeokwu, one Chidubem Mbamara walked into a betting shop, played his bet worth six hundred Naira (N600), but unfortunately wasn’t with enough money to pay.

Sequel to the altercation,  the said Chidubem Mbamara left, only to return some minutes later with a locally made Pistol. He then shot at the said Henry Obi. As a result,  three persons were hit by the bullet,…