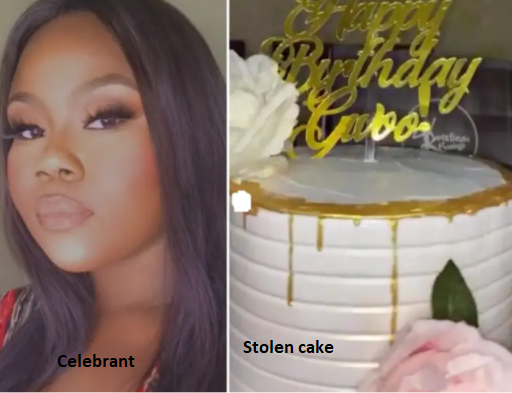 A woman has called out her friend who attended her birthday, accusing her of stealing her cake and wine when leaving.

Twitter user, @giivensibekwe, celebrated her birthday on April 3, 2021, and invited friends over for her party in Port Harcourt.

She said she stepped out by 5am this morning, April 4, to make a delivery and when she returned home by 11, she saw that her birthday cake was missing and so were bottles of Monkey Shoulder, Jameson, and Champagne.

She explained that she called her friend, Reni, who slept over at her house after the party, and asked if she took the cake and bottles of wine but she denied it.

At this point, she said she started accusing the apartment staff, so they took her to view the apartment’s CCTV footage. The celebrant claims the CCTV footage showed her friend, Reni, leaving with the cake and wine.

She shared still shots from the CCTV on Twitter, then  tagged her friend and called her out for “theft”