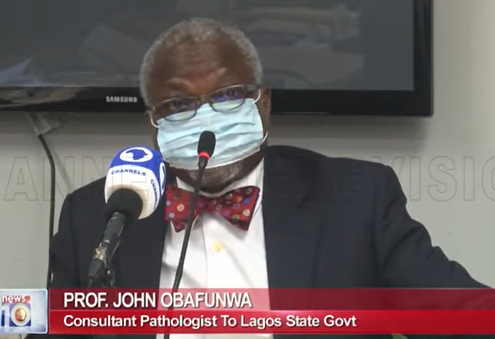 A consultant anatomic and forensic pathologist, Prof. John Obafunwa on Saturday, June 5, told the Lagos state judicial panel on restitution for victims of SARS related abuses and other matters, that the coroner’s office conducted post mortem autopsies on 99 bodies between the October 20 and 27 during and after the #EndSARS protest.

Channels TV reports that Prof. Obafunwa who was involved in coroner services through the office of the Chief Medical Examiner of Lagos State, told the panel that the 99 bodies were picked up from different locations by officers of the Lagos State Environmental Health Monitoring Unit, LASEHMU.

He revealed that of these 99 bodies, only three were identified as victims of the Lekki shootings. He proceeded to speak to the post mortem report and the cause of death of each of the three victims, all male.

He also played video evidence detailing the extent of injury suffered by the deceased and the cause of death.

According to the witness, the first…

Bank workers storm Senator Andy Uba’s house in Abuja, ask him to pay up his debt