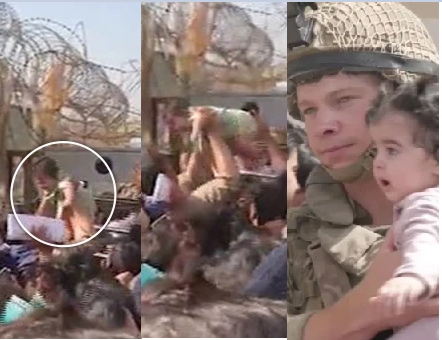 Desperate Afghan mums have been filmed throwing their babies over barbed wire fences at the Kabul airport and begging British paratroopers to take them to safety.

Violent scenes have unfolded at one of the routes to Hamid Karzai International as people try to escape a future under the Taliban militant group.

The entrance to the Baron hotel has become the focal point where Afghans seeking refuge in the UK have been gathering in the hope of being able to escape the Taliban.

It is guarded by Parachute Regiment troops.

One officer told the Independent: “The mothers were desperate, they were getting beaten by the Taliban.

“They shouted, ‘save my baby’ and threw the babies at us.

“Some of the babies fell on the barbed wire. It was awful what happened.

“By the end of the night there wasn’t one man among us who was not crying.”

Another senior military officer spoke about the scenes to Sky News.

He said: “It was terrible, women were throwing their…