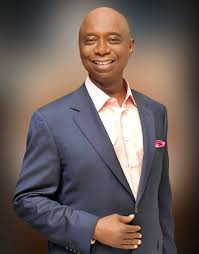 Born on December 21, 1960, into the  Idumuje- Ugboko Royal family in Aniocha North Local Government Area of Delta state , Prince Nwoko attended the University of Keele in Staffordshire, United Kingdom. Here he acquired his Bachelors degree in Law and History.

He then obtained an LLM in Maritime and Commercial Law from King’s College, London. He was subsequently called to the English Bar at Lincoln’s Inn.
Prince Nwoko  later qualified as a Solicitor of the Supreme Court of England and Wales. He then set up his own firm, Ned Nwoko Solicitors and became the Principal Partner and Senior Consultant .

At the zenith of his practice, his organisation had over 30 Lawyers in his employ and  gained international acclaim for its meticulous and tenacious legal battles for financial probity, transparency, management and verification of foreign debts of third world countries and their component states.