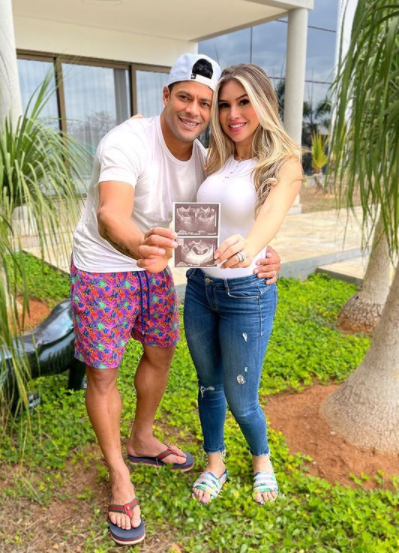 Brazilian striker Givanildo Vieira de Sousa, better known as Hulk is expecting his fourt child with the niece of his ex-wife.

The Atletico Mineiro striker made the announcement on Instagram, sharing photos of him and his ex-wife’s niece, Camila Sousa kissing and holding up ultrasound photos.

Hulk and his ex-wife, Iran Angelo split in July 2019 after 12 years of marriage. Hulk was an uncle to Camila throughout the marriage with Iran.

In December of that year, there were rumours of him being in a relationship with Iran’s 32-year-old niece, Camila.

They eventually got married in September 2020 while the 35-year-old footballer was still playing for Chinese side Shangai SIPG following his split from the mother of his two sons and daughter.

Announcing that he and and Camila are expecting his fourth child, Hulk wrote;

“Today with a heart full of gratitude to God, I come to share with you that for the fourth time I am being blessed with another…