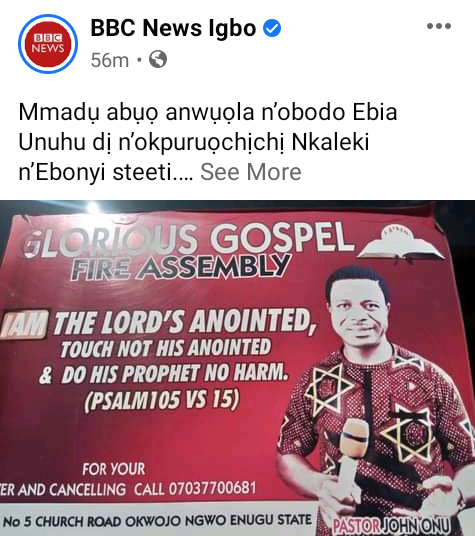 One pastor John Onu, has been killed by police stray bullet at his house in Nkaliki, Abakaliki Local Government Area of Ebonyi State.

The incident happened on Monday morning, September 20, when police protecting a hotel belonging to one Chukwudi Onyibe, a Special Assistant to the Chairman of the Local Government on Internally Generated Revenue, started to shoot sporadically at rioting youths of the area.

Pastor Onu of Glorious Gospel Fire Assembly was observing his morning devotion inside his room in a-3 storey building at Hatchery, Nkaliki road when he was hit by police stray bullets while trying to shut his windows following the commotion outside.

The bullet reportedly hit him on the upper side of his chest and pierced through his back.

It was gathered that the Youths of Ebyia Upnuhu village had gone on rampage, burning houses in the area after a native of the village was beaten to death allegedly by men of Ebube Agu security outfit who came to make some arrest…