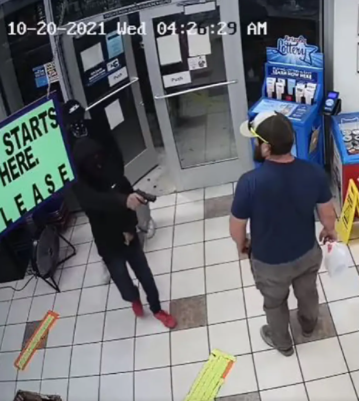 A man who used to serve in the Marine Corps jumped into action to stop an armed robbery at an Arizona gas station.

The incident happened at around 4:30am on Wednesday,  October 20, inside the convenience store at a Chevron gas station.

The veteran was able to detain the suspect until the law enforcement arrived.

Surveillance video shows the veteran standing inside a Chevron gas station in Yuma on Wednesday when two masked suspects walked through the door, one of them holding a handgun.

Authorities said the armed suspect pointed the gun at a worker not seen on camera. Within seconds, the Marine Corps veteran knocked the gun out of the suspect’s hand, took him to the ground and held him there until deputies arrived.

“The Marine Corps taught me not to (mess) around,” the unidentified veteran told Yuma County sheriff’s deputies.

Two other suspects were able to get away. They ran off from the store after their friend was disarmed and haven’t been…