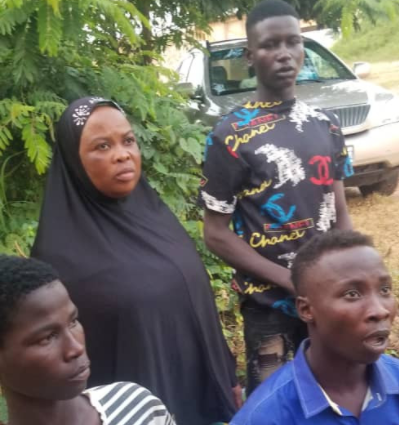 A housewife, Memunat Salaudeen was on Monday, November 1, arrested by operatives of Ogun state police command for planning with three others to kidnap her husband.

The suspects were apprehended at about 6:30 pm along Papa/Itori road while men of Federal Highway patrol team, led by Inspector Sunday Imohiosen, were on stop and search duty. The team, accosted three young men namely Olayinka Lawal, Asungba Nura and Usman Oluwatoyin whose look was highly suspicious on a motorcycle, and stopped them for search.

While searching them, a cutlass and a new strong rope were recovered from them. The team quickly separated them and questioned them individually about their mission in that area with rope and cutlass. The three of them gave different answers to the question, this further aroused the suspicion of the policemen, who then decided to interrogate them more.

In the course of interrogation, the three of them confessed that it was one woman who was later identified as…