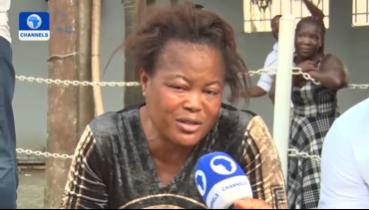 A distraught mother has appealed to the Lagos state government to help rescue her 25-year-old daughter trapped in the rubble at the Ikoyi building collapse.

The mum said her daughter, Zainab Oyindamola has been in the rubble since on Monday November 1, when the collapse happened.

In an interview with Channels TV, the woman said Zainab is an IT student. She said shortly before the collapse, she came out of the site to buy food. It was the food vendors who confirmed to her that Zainab was in the building when it collapsed as she returned back to the site after buying food from them.

Watch the video of the mum speaking below