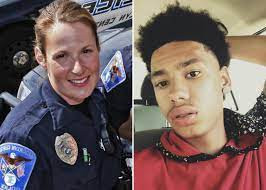 The former Minneapolis police officer accused of fatally shooting Daunte Wright, a Black motorist, after she confused her handgun for her Taser during a traffic stop in April, will testify at her trial.

Her attorney, Paul Engh disclosed the decision to have Kim Potter take the stand after a potential juror wrote in her questionnaire that she didn’t fully understand how the fatal encounter came about.

“Let me tell you, that if you’re selected, Officer Potter will testify and tell you what she remembered what happened,” Engh said.

“So you will know, not just from the video, but from the officers at the scene and Officer Potter herself what was occurring. I think it should quite interesting in hearing what she has to say.”

Her attorney revealed this on Tuesday November 30, as jury selection got underway.

Potter, a 26-year veteran of the Brooklyn Center Police Department, was charged with first- and second-degree manslaughter in the death of Wright.