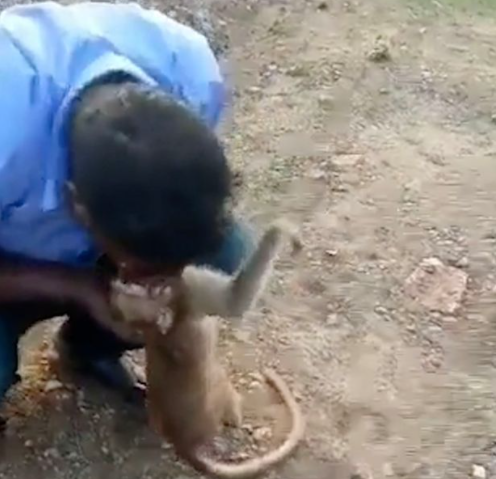 A man saved a monkey by giving it continuous chest compressions and even mouth-to-mouth resuscitation after it was attacked by wild dogs.

Video taken by villagers shows the animal lying unconscious on the ground as a local man, who is known as M Prabhu, rushes to perform first aid.

The eight-month-old macaque was allegedly attacked by a pack of wild dogs in the state of Tamil Nadu, south India, on Thursday, Dec. 9.

Prabhu is seen doing chest compressions on the animal and giving it mouth-to-mouth resuscitation in a desperate bid to bring it back to life.

After a few minutes of continuous effort, the monkey appears to regain consciousness and is breathing faintly in Prabhu’s arms.

Prbhu later takes the baby monkey to a veterinary hospital.

“We were on the Perambalur-Ariyalur road, when her condition deteriorated,” he said. “I was worried about her condition and decided to take her to a hospital after she did not drink water.

“I am lucky to be there on…