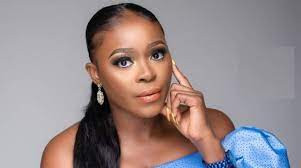 Actress Chioma Ifemeludike has reacted to the recent increase in ritual killings across the country.

In a post she shared on her IG page today, Chioma opined that the lifestyle entertainers show off which does not correlate with their income has directly or indirectly influenced Nigerian youths.

She disagreed with the notion that Nollywood movies have influenced many to see money rituals as a potent way to make money. She also mentioned that the music being released by artistes of this generation tends to mount more pressure on the youths to make money as soon as possible.

Read what she wrote below…