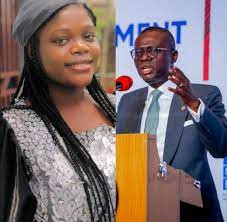 The Lagos State Governor, Babajide Sanwo-Olu, has cautioned residents across the state against boarding the Bus Rapid Transit vehicle without inner lights at night.

The governor said this following the abduction and murder of a 22-year-old lady, Oluwabamishe Ayanwole, after boarding a BRT bus. A video shared by Bamise before her gruesome murder showed she was in a BRT bus without inner lights.

Speaking at an event held at the Mobolaji Johnson Arena in Onikan to commemorate International Women’s Day on Tuesday, March 8, the governor noted that buses that have closed for the day would indicate by switching off its inner lights.

According to him, when BRT drivers switch off their inner lights, Sanwo-Olu said the buses were expected to be taken back empty to their yards.

“Any bus that has its inner lights on at night is certainly still on service. Once the lights are off and the radar in the bus is not displaying, people should desist from boarding such bus, because…