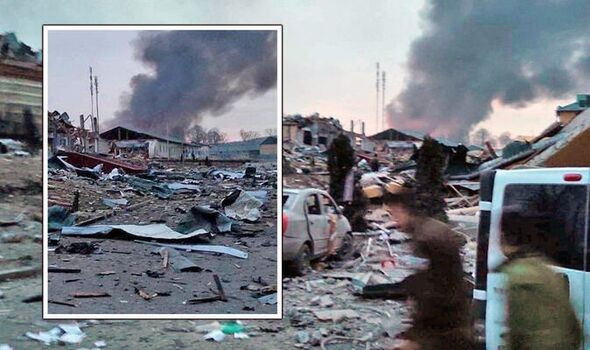 Three British former special forces soldiers are feared to have been killed in a Russian airstrike near the Polish border.

More than 30 Russian cruise missiles targeted the Yavoriv base yesterday, killing as many as 180 people.

The trio were not part of the foreign legion fighting unit being trained at the base six miles from the border, sources told The Mirror.

Igor Konashenkov, a spokesman for Russia’s ministry of defence, said the base was struck by ‘long-range, high-precision’ weapons because it was hosting ‘foreign mercenaries and a large shipment of foreign weapons’.

He added: ‘The destruction of foreign mercenaries who arrived on the territory of Ukraine will continue.’

Konashenkov said up to 180 people had been killed in the strike, though Ukraine initially said 35 people died and another 134 were wounded.

But a source told The Mirror today: ‘There were many more killed within the site than has been claimed and bodies are still being found.