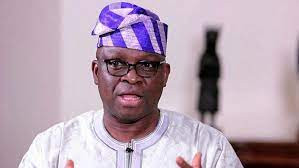 Former governor of Ekiti state, Ayo Fayose, says he is being vindicated daily after he was attacked in 2015 when he spoke against the emergence of the Buhari-led administration.

”My voice was the loudest in 2015 against the inherent dangers of a Buhari’s Presidency. No one listened. Rather, I was attacked and insulted. Today, “Water dan pass Gari” as I am daily vindicated.

Buhari’s sponsors and those who insulted me then should enjoy this while it lasts. Hopefully, we have all learnt our lessons about this FAKE CHANGE.”