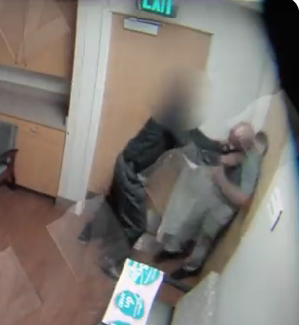 A disturbing video shows the moments a Veterans Affairs’ employee pushed an elderly Vietnam veteran into a door and body-slammed him to the ground.

Phillip Webb, 73, said he was attacked at the Department of Veterans Affairs Clinic at Fort McPherson in Atlanta on April 28.

A video of the attack was obtained by investigative reporter Justin Gray.

Gray filed a Freedom of Information Act request and had to wait more than a month and a half to get the surveillance video, which shows a VA patient advocate viciously hit and kick Webb.

On Monday, June 20, Gray showed Webb the video of the moment he was assaulted.

Webb said he doesn’t remember much about the attack.

In the video, the two men appear to have a brief argument and Gaillard put his finger up to Webb’s face. When Webb tries to push it away, Gaillard attacks, shoving him against the wall, choking him with both hands…