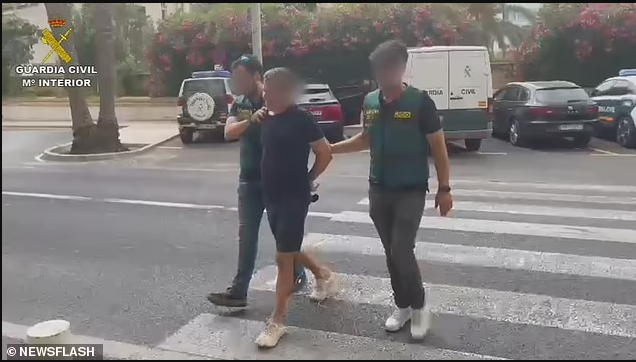 Britain’s ‘most wanted’ cocaine boss has been arrested after police stormed a Benidorm hotel.

Suspect, Louis James Edwards was taken into custody on June 21, police in Spain have announced today.

The 44-year-old, who is listed as one of Crimestoppers’ most wanted criminals, was filmed being led barefoot in shorts and a T-shirt through a public square by two officers. They are said to have later given him trainers.

He is believed to have led a criminal network that distributed cocaine all over southern England.

Detectives tracked him to Malaga before their search led them to the southeastern province.

In a separate raid the next day, also in Alicante, police arrested Dutch national Cornelis Korfet.

The 35-year-old was seized in L’Alfas del Pi, not far from Benidorm.

An official video of shaven-headed Korfet’s arrest shows him trying to flee through a cafe after enjoying breakfast with friends.

Korfet is wanted for attempted murder by Dutch police,…