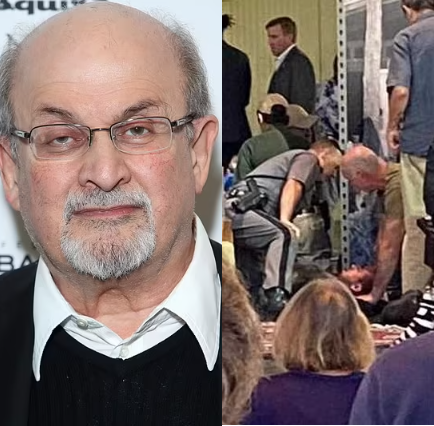 Author Salman Rushdie has been airlifted to hospital after being stabbed multiple times on stage as he prepared to give a speech in New York.

The writer, 75, was attacked as he was being introduced to the stage for the CHQ 2022 event in Chautauqua, near Buffalo, on Friday morning, August 12.

Witnesses claim that a man rushed onto the stage, approached the author from behind, and stabbed him ten to fifteen times.

Blood was spattered on the wall behind where Rushdie had been attacked, with some also seen on a chair.

His current condition is not known.

Witnesses claim that the attacker managed to walk off the stage after the stabbing, before being restrained, as people rushed to assist Rushdie.

A man has been arrested by New York state troopers.

Governor Kathy Hochul called the attack on Rushdie “heartbreaking” before confirming that he is “alive.”