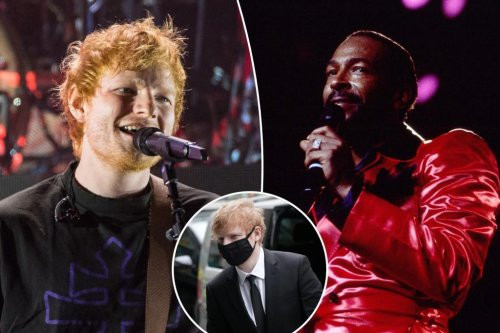 British singer and songwriter, Ed Sheeran will face trial in the US over claims he copied his 2014  hit ‘Thinking Out Loud’ from Marvin Gaye’s 1973 classic ‘Let’s Get It On’.

U.S. District Judge Louis Stanton in Manhattan denied Sheeran’s bid to dismiss the copyright infringement suit, saying a jury should decide on whether the two songs are substantially similar.

The move comes after Sheeran, 31, and his co-songwriters were awarded more than £900,000 in legal costs in June after winning their UK High Court copyright trial over the hit Shape of Year in March.

After that ruling six months ago, Sheeran lashed out at the ‘baseless claims’ being brought against singer-songwriters.

On Thursday, Judge Stanton said that Sheeran must now face trial in the US amid claims Thinking Out Loud is copied from Gaye’s Let’s Get It On.

The copyright infringement suit was originally lodged in 2018 – not by Gaye’s family, but by Structured Asset Sales LLC, which owns a portion of…