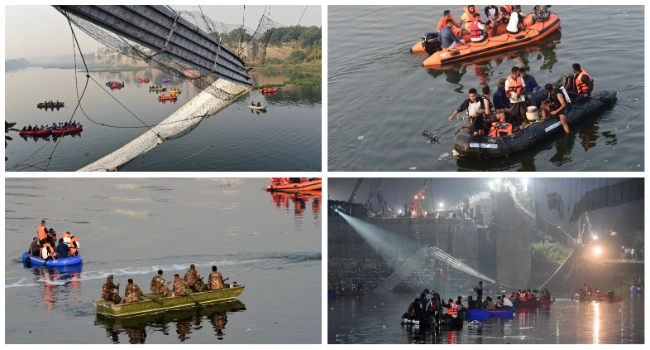 At least 132 people have died after a century-old cable suspension bridge collapsed into a river Sunday evening, October 30, in the western Indian state of Gujarat, sending hundreds into the water in one of the worst accidents in the country over the last decade.

Videos on social media showed people clinging onto the metal cables of the partly submerged bridge in distress as emergency teams and rescuers used boats and inflatable tires to reach them. Some people were seen swimming ashore to safety. Others, who were fished from the waters, were carried away and transported to hospitals in private vehicles and ambulances.

Authorities on Monday morning, October 31, said the 19th-century, colonial-era pedestrian bridge over the Machchu river in the area, collapsed because it could not handle the weight of the large crowd, as the Hindu festival season drew hundreds of people to the recently opened tourist attraction.

Before the collapse, the 761-foot-long bridge had been closed for…

NDLEA arrests pregnant woman with 34.4kgs of cannabis in Rivers