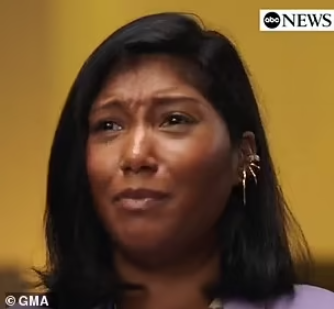 Chadwick Bosemen’s widow, Simone Ledward Boseman broke down in tears on TV as she gushed about how “lucky” she was to love the actor.

In an interview with Good Morning America, Simone, 31, sat down with The View host, Whoopi, 66, to discuss her and Chadwick’s five-year romance, including how they met and the moment he made the first move on her, as well as his secret fight with colon cancer, how they kept it hidden from the world, and how she has dealt with the tragic loss.

Simone, who worked at the Hollywood Bowl, first met the Black Panther star in 2014, when he attended a James Brown tribute concert at the venue. And according to Simone, he made it known that he was interested in her pretty much right away.

“We were on the side of the stage at a certain point, and I guess he didn’t know if I was really catching his hints. And he…