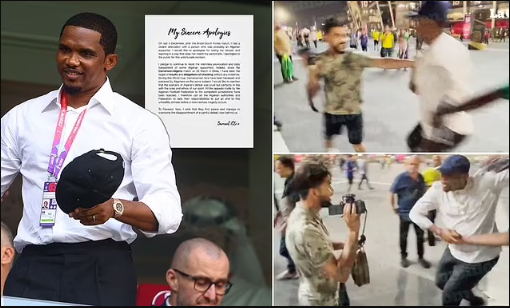 Samuel Eto’o has issued an apology after getting into a physical altercation with an Algerian YouTuber whilst in Dubai for the World Cup.

The ex-Barcelona and Chelsea striker was caught on camera kneeing a man as he filmed him while he left Stadium 974 in Doha where Brazil had just beaten South Korea 4-1 Monday December 5.

Eto’o lost his temper after the YouTuber named Said Mamouni asked whether Eto’o had given the referee a bribe before Cameroon’s crucial playoff victory over Algeria in March, which granted his side a place at the World Cup in Qatar.

The former striker, who is currently Cameroon FA president issued a statement apologising for his actions.

In his statement, Eto’o wrote: ‘On 5 December, after the Brazil-South Korea match, I had a violent altercation with a person who was probably an Algerian supporter.

‘I would like to apologise for losing my temper and reacting in a way that does not match my personality. I apologise to the public…