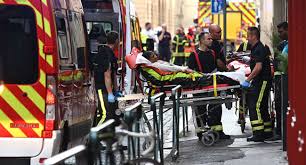 A package blast on a pedestrian street in the heart of France’s city of Lyon wounded several people Friday, officials said, just two days ahead of the country’s hotly contested European Parliament elections.

President Emmanuel Macron called the blast an “attack” during a live Facebook interview, adding that no deaths had been reported “for the time being”.

The area where the explosion occurred, on a narrow strip of land between the Saone and Rhone rivers in the historic centre of the southeast city, was evacuated and cordoned off by police, according to AFP journalists at the scene.

A police source told AFP the package contained “screws or bolts” and had been placed in front of a bakery near a busy corner of two popular streets.

A man apparently in his early 30s who was spotted near the scene shortly before the attack was being sought by police, a source close to the inquiry said.