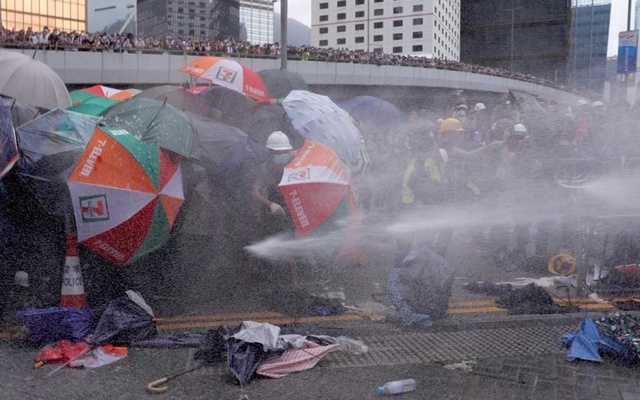 Hong Kong police fired water cannon on anti-government protesters in an unprecedented move on Sunday, after an initially peaceful march through a residential district in the western Kowloon peninsula took a violent turn.

Two crowd-control vehicles were dispatched after protesters earlier took control of a major road, where thousands stood behind barricades and shielded themselves from police tear gas with umbrellas.

The vehicles chased protesters for several hundred metres before they dispersed into surrounding side streets and a nearby mall.

Tseun Wan is best known for its tower-block housing estates and new office blocks, but on Sunday its streets descended into chaos as protesters threw a number of petrol bombs and bricks at riot police.

A police officer fired a gun into the air at around 8 pm (1200 GMT) after he was surrounded by eight to 10 protesters, according to a district council protest monitor.