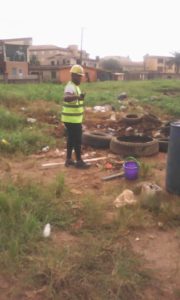 The Lagos State Emergency Management Agency (LASEMA) Response Team said it had taken measures to minimise the risk of explosion from a leaking pipeline at Baruwa area, Jakande, Ipaja, Lagos.

The Director-General of LASEMA, Dr Olufemi Oke-Osanyintolu, made this known in an interview with the News Agency of Nigeria (NAN) in Lagos on Tuesday.

According to him, the team discovered that petrol was leaking from the pipeline at Baruwa area, Jakande in Ipaja.

He explained that further information gathered at the scene revealed that the cause of the leakage was due to improper sealing of the pipeline.

“We were also informed that the pipeline had been damaged before now.

“Safety measures have been taken by our response team and officials of the Nigerian National Petroleum Corporation (NNPC) by blanketing the region of leakage with chemicals to avoid explosion.

“No casualty was recorded. The LASEMA response…