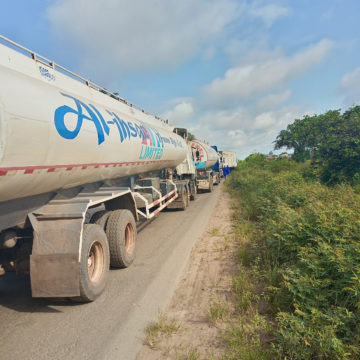 Tragedy beckons along failed portions of the busy Warri-Benin expressway within Koko/Ologbo boundary as folks have begun to scoop petrol fuel spilled from two fallen tankers on Saturday morning.

Reports say scores of travellers are also stranded at the boundary area between Delta and Edo states due to the accident.

The two fallen tankers were said to be laden with over 33,000 litres of petrol spilling their contents on the road median.

Residents in the area, in their usual elements, have trooped to the scene with buckets and kegs scooping the spilled petroleum product in defiance of the associated hazards.