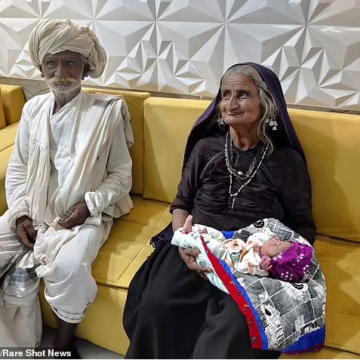 An Indian woman has had her first child at the age of 70 after agreeing with her husband to undergo IVF treatment for the last time, making her one of the oldest first-time mothers in the world, the Daily Mail of UK reported.

Jivunben Rabari and her husband Maldhari, 75, proudly showed off their son – whose name they have not revealed – to reporters as they said he had been conceived through IVF.

Rabari told reporters she was 70, which would make her one of the oldest first mothers in the world. However, another Indian woman, Erramatti Mangayamma, is believed to be the oldest after having twin girls in September 2019 at the age of 74.

Rabari and Maldhari, from a small village called…