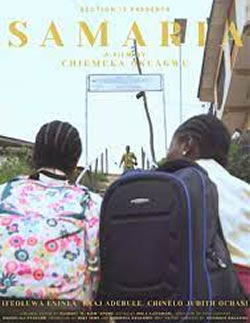 Shot in the heart of Lagos, the 15-minute film spotlights the struggles an average girl child faces in Nigeria.

Samaria is written and directed by first-time director, Chiemeka Osuagwu, who co-produced the film with Ruby Igwe for their imprint production house, Section 13 Entertainment.

According to writer and director, Chiemeka Osuagwu, “Samaria…