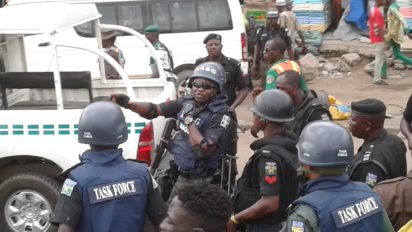 An 18-year-old girl, Hadiyat Sikiru, has been allegedly killed by a stray bullet during a crossfire between suspected cultists/kidnappers and Police officers in Adamo community, Ikorodu area of Lagos.

It was learned that trouble started after a team of policemen on surveillance raided the community, following a tip-off that suspected cultists that specialised in kidnapping and killing people for ritual, were hibernating in the area.

On sighting the Police, the suspects allegedly opened fire and equally used some of their hostages as human shields, forcing the Police to retaliate. In the process Hadiyat Sikiru was allegedly hit by a stray bullet.

The death of Hadiyat Sikiru, a Senior Secondary School, SSS, 1 student sparked off protest, as youths in the area forced the Police to abandon their operational vehicle and took to their heels.

They succeeded in seizing a Police patrol vehicle and setting it…