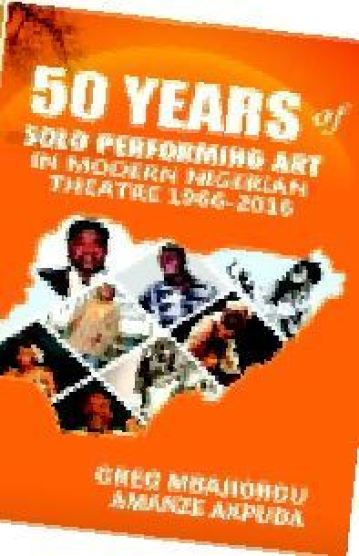 The 614–paged 50 Years of Solo Performing Art in Nigerian Theatre 1966-2016 edited by Greg Mbajiorgu and Amanze Akpuda is a monumental accomplishment in the annals of the theatre tradition and scholarship in Nigeria. The book is a compendium of varied vignettes of theatrical practice surrounding Solo Performing art in Nigeria.

Until the arrival of this treasure, perhaps Solo or mono-dramatic subgenre was at least, seen as a perfunctory art without any generally accepted form or structure. In Nigeria, stand-up comedians or masters of ceremonies practising an art which then was regarded as a far cry from the organized theatre with up-to-date dramaturgy were commonly seen as Solo performing artists. It is this lacuna that this book has palpably filled, thereby incontrovertibly becoming the first authoritative book on the mono-dramatic or minimalist theatre in Nigeria.

Diverse, if variegated aspects of Solo- theatre are reflected in nine parts with insightful and…

Zola names two players who got ‘bored’ under Sarri

Nigerian doctors’ welfare will be my priority — Professor Innocent Ujah