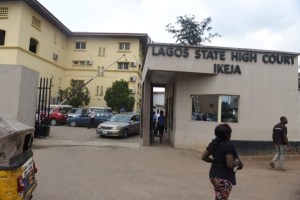 Lagos socialite, Buhari Oloto, has been charged alongside four others before a Lagos State High Court for unlawful interference with property, contrary to Section 2(1) of the Lagos State Properties Protection Law 2016.

The police gave the particular of the offence as follows: “Buhari Oloto, Tomori Williams, Adeyemi Adewale, Jimoh Jafar and a Chief Edward Akande between January and April, 2016 at Alaka area of Lagos within the jurisdiction of this honourable court, unlawfully interfered with a vast expanse of land, property of the Registered Trustees of the Estate of Late Madam Iyalode Efunroye Tinubu and prevented the trustees, their lawful representatives and genuine purchaser of the portions of the said land, from making use of…