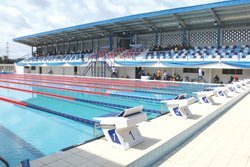 Uyo, May 19, 2019 (NAN) A 100 level student of University of Uyo, identified as Kingsley Etim, was said to have been drowned in the swimming pool of De Vegas Paradise Hotel in Uyo on Saturday during a pool party.

An eyewitness, who pleaded anonymity, said the incident occurred about 9.00 p.m. on Saturday, adding that the deceased was found when one of his colleagues spotted the body after others had left the pool.
“When my friends and I were about leaving the venue of the party to catch up with time before they lock our…