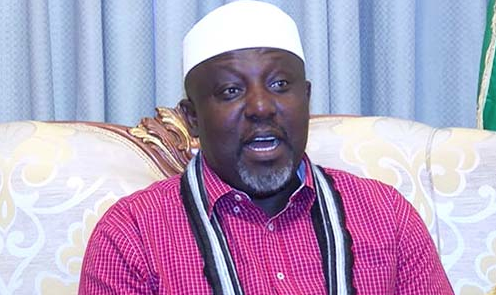 The outgoing governor of Imo State, Rochas Okorocha, yesterday said the 2019 election proved that without him (Okorocha), there would be nothing like All Progressives Congress, APC, in the South-East zone.

Okorocha, through his Chief Press Secretary, Sam Onwuemedo, spoke in Owerri while reacting to a statement credited to the Director of Voice of Nigeria, VON, Osita Okechukwu, saying that he (Okorocha) has destroyed APC in the South-East.

Governor Okorocha boasted that he started APC in the South-East and challenged Okechukwu to build APC in Enugu and not pour vituperations on him.

According to the release, ”Director-General of the Voice of Nigeria, VON, Mr. Osita Okechukwu has continued his media attacks on Governor Rochas Okorocha even when one had thought that with the 2019 elections, he should have stopped his insults on the Imo governor having seen that the election had proved that without Okorocha, there is nothing like APC in the South-East and in Imo in…