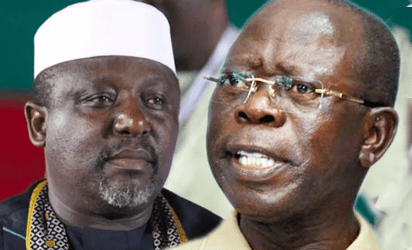 THE Edo Unity League yesterday condemned the recent attacks by the out-going governor of Imo State, Rochas Okorocha on the National Chairman of the All Progressives Congress, APC, Comrade Adams Oshiomhole and called on Ohanaeze Ndi Igbo to call Okorocha to order.

The group was reacting to a recent allegation by Okorocha that APC and Oshiomhole were conniving with INEC to deny him of his senatorial ambition.

A statement by the chairman and secretary of the group; Hon Ayamenkhue Edokpolo and Jeffery Igbinigie called on Okorocha to focus on the governance of Imo State which they said he was elected to do “and stop his futile effort at bringing to disrepute, the long-standing relevance, acceptability of Comrade Adams Oshiomhole.