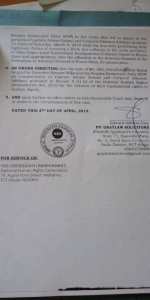 A Federal high court in Abuja, has been asked to order the investigation of Governor Nyesom Wike of River state over the violence during the conduct of the 2019 Presidential election in the state.

The Incorporated Trustees Global Integrity Crusade Network had dragged the National Human Rights Commission before the court asking it to compel the commission to begin the probe of Governor Wike for his role in the electoral violence that occured in the state during the election.

The plaintiff, through their counsel, Mr Edward Omaga, applied for an of Order of Mandamus compelling the commission to begin investigation into the role of Governor Nyesom Wike and the Peoples Democratic Party (PDP) in the crisis that led to injury of Captain Adams Salami and Corporal Adeosun Adebayo, whike performing their legitimate duties of ensuring a hitch free collation at Obio/Akpor Local Government Headquarters Collation Centre in Rivers State.

ALSO READ: Devil in the details

How Gov Emmanuel is ending decade arrears of gratuities, pensions in Akwa Ibom