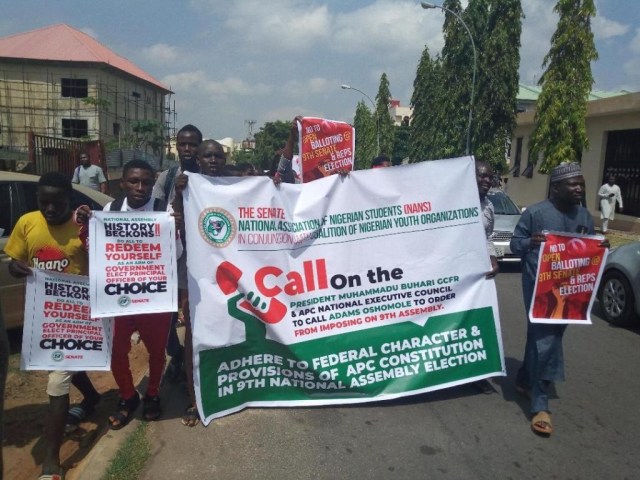 ABUJA – Ahead of the inauguration of the ninth National Assembly next month, the National Association of Nigerian Students NANS on Thursday asked President Muhammadu Buhari to call the National Chairman of the ruling All Progressives Congress APC, Adams Oshiomhole to order over his alleged plans to impose principal officers on the assembly.

The student body which protested at the national secretariat of the party in Abuja also asked the party to hold a National Executive Committee NEC meeting where the party’s chairman should be so cautioned.

The student leaders carried placards with inscriptions such as “No to open balloting at 9th Senate and Reps election”, “Asiwaju Tinubu, as a democrat, allow each candidate to ride on his/ her credibility”, “Adams Oshiomhole, you are derailing our hard-earned democracy” among others, also took a copy of the protest letter to Lagos House in Asokoro, for Asiwaju Bola Tinubu.

Addressing journalists during the…