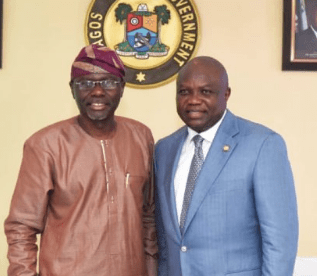 By Olasunkanmi Akoni & Monsuru Olowoopejo
LAGOS—THE out- going Governor of Lagos State, Mr. Akinwunmi Ambode, Tuesday, officially handed over to the Governor-elect, Mr. Babajide Sanwo-Olu, ahead of his inauguration today as the atmosphere at the Lagos State House, Alausa, Ikeja, was filled with excitement.

Shortly after the handing over at the Government House, Alausa, the governor-elect told newsmen that it “was a very private formal hand over.”

The governor-elect was accompanied by his running-mate in the election,  Dr Obafemi Hamzat.

This came as the Alliance for Democracy, AD, and its governorship candidate, Chief Owolabi Salis at an Election Petition Tribunal sitting in Ikeja lost their bid to stop the swearing-in of Mr. Sanwo-Olu, as the Executive Governor of Lagos State today.

Ambode handed over the administration to Sanwo-Olu,…