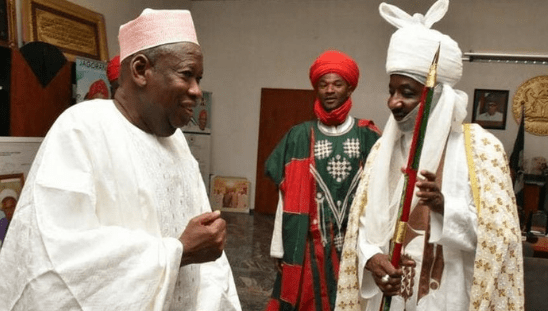 Kano – Despite the protocol arrangement, the seat of the Emir of Kano, Muhammadu Sanusi II was empty at the swearing-in ceremony for a second term in office, of the Kano state Governor Dr Abdullahi Ganduje.

This might not be unconnected with the recent feud between the Emir and governor Ganduje who created four new Emirates out of the Kano Emirate and is charging the Emir of alleged partisanship and embezzlement of the Emirate’s funds.

The event which took place on Wednesday witnessed the presence of a mammoth crowd of supporters amidst very tight security.

However, the event was witnessed by the Emirs of Bichi, Gaya, Rano and Karaye.

The oath of allegiance and the oath of office were administered to the Kano state Governor Abdullahi Ganduje and his deputy Alhaji Nasiru Yusuf Gawuna by the Chief Judge of Kano state, Justice Nuraddeen Sagir Umar.

In his maiden address at the event, governor…