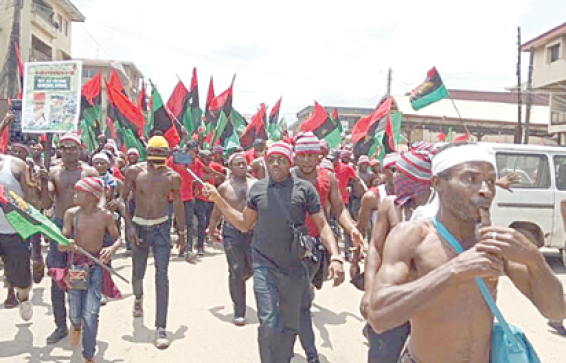 UMUAHIA—AHEAD of today’s sit-at-home order by the Indigenous People of Biafra, IPOB, and other pro-Biafra groups, security operatives have, in the past one week, been engaged in Operation Show-of-Force with a combined force of Military, Naval and Police personnel patrolling the major streets of Umuahia and environs.

It is believed that Umuahia is the headquarters of IPOB, being the native home of their leader, Nnamdi Kanu.

Though the security operatives have not harassed anybody, they said the operation was to alert the people and warn pro-Biafra groups not to cause any trouble.

There have also been warnings from Police authorities to the group to desist from making such calls for sit-at-home as it had no rights to do so.

However, IPOB, in a statement by its spokeman, Emma Powerful, insisted on going ahead with the sit-at-home programme, saying “the…