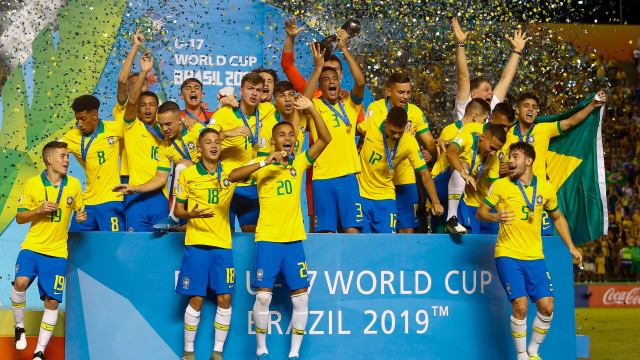 Brazil Under-17s picked up their fourth World Cup title on Sunday, with two late goals steering them to a 2-1 win over Mexico in the final.

There were doubts over whether the Seleção would be able to do it, having seen star player Reinier Jesus – a target for Atlético Madrid, Barcelona and Chelsea – forced to stay home by Flamengo, but their strength in depth proved too much for the competition.

With so many exciting talents in their ranks, here are six names you should expect to see stealing headlines in the very near future.

For any Brazilian youngster coming through the ranks at Santos, comparisons to ​Neymar are hard to avoid. Fortunately for 17-year-old forward Kaio Jorge, he has the potential to back up the excitement around him.

Jorge finished the tournament with five goals, and he will hope to use that as momentum when he returns to his club, where he has already made two senior appearances.

As well as Neymar,…