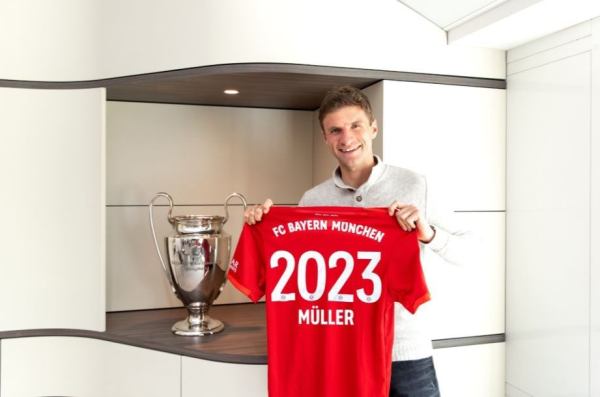 Thomas Mueller looks set to spend his entire career at Bayern Munich, who he describes as his ‘passion’, after signing a contract extension until 2023, the reigning Bundesliga champions announced on Tuesday.

The 30-year-old joined the club as a schoolboy in 2000, making his debut for the Bavarians eight years later and has since racked up more than 500 appearances.

“I am really pleased that I have extended with Bayern Munich… and will continue to give everything for my club,” the 2014 World Cup winner said on Twitter.

“Because this club is not just an employer for me – it is a passion.”

Having risen up through the youth ranks, Mueller is a club icon who has won eight league titles, five German Cups and the 2013 Champions League.

“I’m happy that we’ve reached agreement with Thomas. Thomas is a special player for us, a figurehead for the club and our fans, a leader who shows the way on the pitch and has achieved a lot with FC Bayern,” sporting director…