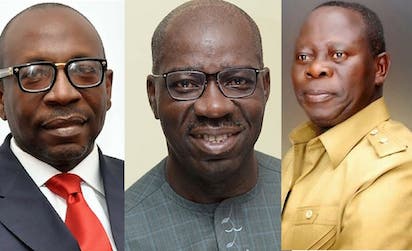 …Says, party primaries can only hold in Benin;

The battle for the Governorship ticket of the ruling All Progressives Congress APC in Edo state has assumed a dangerous twist with the two sides to the dispute not only refusing to shift grounds but also taking steps that could make the party lose to the opposition.

Ahead of the June 22 primary election, Gov. Godwin Obaseki has issued  supplementary regulations on the control of infectious diseases, placing a ban on the gatherings that have more than 20 persons.

While the ban is seen as a move to stop the direct primary option as decided by the Comrade Adams Oshiomhole-led National Working Committee NWC of the party, the governor, in a bid to have…