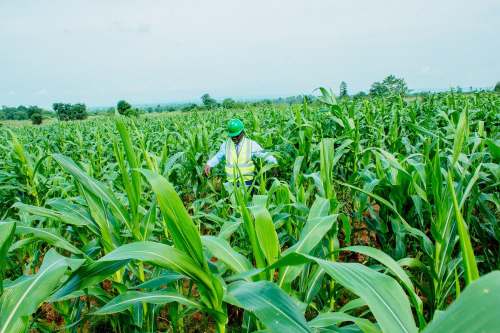 The Central Bank of Nigeria, CBN, on Tuesday, expressed its readiness to capture 200,000 maize farmers across the country with a view to boosting maize production in Nigeria.

The Director Head of Finance Development, CBN, Mr. Ihua Elenwor disclosed this in Asaba, Delta State during the flag-off of 2020 wet season maize farming with over 2000 hectares land of the Federal Government, Maize Association of Nigeria, MAAN and CBN, Anchor Borrowers Programme held in Ogwashi-Uku, Aniocha South local government area of the state.

Elenwor said it takes a partnership to build and develop a nation, adding that over 1, 284 MAAN and maize growers procession farmers in Delta hold their destinies in their hands. He held that 70 percent of poultry feeds were taken from maize.

He said: “The Central Bank wants to support smallholder farmers with 166, 000 inputs for farmers that will produce a minimum of four tones of maize in a hectare of land.

Folashade calls for prayers for Nigeria