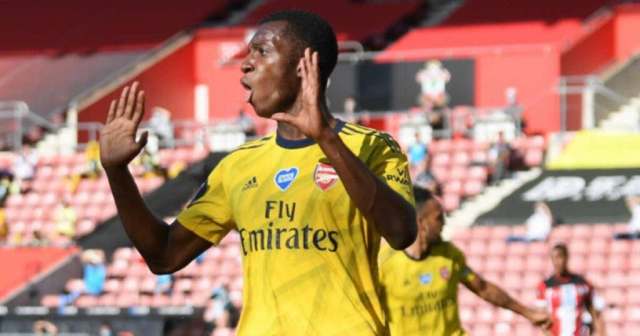 Mikel Arteta is thrilled by the “incredible” maturity shown by Eddie Nketiah since his return to Arsenal, while he also reminded Bukayo Saka he has all he needs at Arsenal amid transfer speculation.

Arsenal had suffered back-to-back defeats to Manchester City and Brighton and Hove Albion following the Premier League’s resumption earlier this month, with the Gunners falling well short of expectations.

But at St. Mary’s they avoided a third consecutive loss, Nketiah opening the scoring in the first half when he charged down an Alex McCarthy pass and slotted into an empty net.

Joe Willock secured the win late on shortly after Jack Stephens was sent off, but it was Nketiah who made the biggest impression on Arteta.

“Eddie, since I joined, the maturity [he’s shown] is incredible,” Arteta told reporters. “I demand a lot from the forward players and they’ve done it.

“A lot of goals we score are because of the errors we force. In that heat it’s…