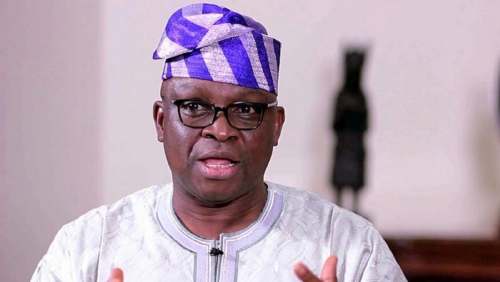 As the crisis in Ekiti state chapter of the All Progressives Congress(APC) rages unabated, ex-governor Ayodele Fayose has told the Special Adviser to President on Political Matters, Senator Babafemi Ojudu and former Minister of Works, Senator Adedayo Adeyeye, to perish the thought of coming to the People’s Democratic Party (PDP).

Fayose said the party is not in need, neither is it interested in the defection of the duo into the party despite their differences with Governor Kayode Fayemi, “because they have no electoral values”.

Ojudu and Adeyeye, who are members of the APC are currently at dagger drawn with Fayemi over the governor’s alleged dictatorship and victimisation of members of the party.

Based on this feud, when asked whether the aggrieved APC leaders will join the PDP while appearing on a radio programme in Ado Ekiti, Ojudu discountenanced the speculation, saying he would never contemplate such move.